Day 1 (click here) started with retrieving the 16 mini sized arcs (with the wrong sized bamboo battens which were sent from the mountains yesterday- what a palaver). We are working on a 1:2 scale bamboo model. We noticed some off shaped ones so we re-measured them all. Plan had to change slightly accommodating the wrong size of bamboo battens as the hoops are mostly floppy!

We put up the temporary support: The centre column and three guy lines. We considered putting the 1:2 structure in between the existing planters so we can guy them up with additional guy on the concrete grill. This particular exercise is useful for the real size build, most definitely we will also need a temporary structure. 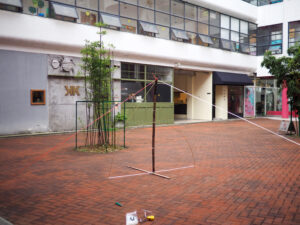 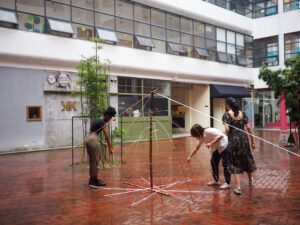 The bigger the diameter of the hoops, these non supported ones (from about #13 onwards) got really floppy and tended to twist. The team decided to proceed and added horizontal supports once all 16 hoops were in place. 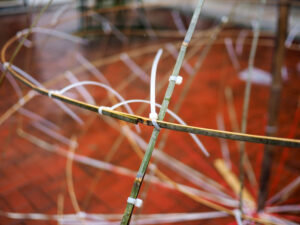 The first layer of horizontal supports were up, then we continued with the next layers. In total we had 5 layers and the more we put the horizontal elements, the more stable the structure was. We removed the guy lines before adding the 5th layer, which was not planned. The joy of physical model making! Then it was the acid test whether the structure will be self-supporting despite the wrong dimensions. We also learnt that probably 50mm would have been too wide for 1:2 scale, so not all mistakes went unreflected on. 20-25mm wide would have been a better size as the main structural system for this play tent for kids 🙂 Generally Matt and I are really happy with these two days. It was planned for three days, but some of the students had emergencies so we decided to start on Tuesday instead. The light rain on Tuesday morning presented a challenge, especially for Nancy whose flowing summer dress got wet every time she crouched down- which was a lot- but at least it kept things cool. It got quite hot in the afternoon. I enjoyed the experience as well, and knowing this project does not stop here gives me something to look forward too as a lecturer.

A few things we want to address for the final build are: the joints (zip ties are amazing for this kind of purpose but we rely too much on them: a more sustainable option such as hemp could be the better option),  the floor ideally needs to have a base, and the possibility to be flat packed with stretchy horizontal joints so they can be a movable pod would all be good adjustments.